The Stages of Life Through the lens of Macaroni & Cheese

I know, I know. It has been like forever. Life. That's all. But today I had a fun reunion lunch with some old friends and one mentioned that she missed reading the blog and I realized that in a lot of ways, I've missed it too. Then I went home and fixed a box of mac & cheese for the one remaining non-adult left in my home. She ate the whole box by herself. I remembered with a fair bit of melancholy that one box used to feed all four kids. That sparked this bit of ridiculousness...

The Macaroni & Cheese stages of life…

--Make a salad for yourself and mac&cheese for kids’ lunch. Cut into small pieces for toddler. Serve leftovers everyday until it dries out. Throw the rest away. Be sorry for dumping $.88 down the drain.

--Make a salad for yourself and mac&cheese for the kids for lunch. Save the leftovers in previously unused wedding gift Tupperware. Secretly eat the leftovers before bed.

--Add hot dogs to mac&cheese and call it dinner. Serve with a side of baby carrots for color.

--Add hot dogs to mac&cheese and call it dinner. Throw away the rest of the bag of dried out baby carrots.

--Cook two boxes of mac&cheese for lunch. Feed roughly a half a dozen kids. Serve sliced apples and juices boxes on the side. Let them have a popsicle if they eat the apples. Pat yourself on the back.

--Make 2 boxes of mac&cheese for dinner. Place in fancy dish. Add real cheese and cornflakes to the top. Bake. Call it nouilles et fromage en casserole. Pat yourself on the back again.

--Tell the kids that fettuccini Alfredo tastes just like mac&cheese. Make them eat it.

--Add chicken and peas to the fettuccini Alfredo. Send the leftovers with hubby to work for lunch the next day. Go back to mac&cheese. Splurge for the fancy brand.

--Work your way back down to one box of mac&cheese for lunch until last kid goes off to school.

--Wonder why there are so many uneaten boxes of mac&cheese in the pantry.

--Show the teen-agers where you keep the mac&cheese.

--Secretly eat the leftover mac&cheese out of the pot when you clean up after the teen-agers.

--Store cases of mac&cheese in case of emergency. Send a case with each kid when they leave for college.

--Prepare 5 year old mac&cheese for kids when they come home on school breaks.

--Stock up on the expensive organic brand mac&cheese for grandkids. Avoid the temptation to eat the leftovers because of the carbs.

--Eat mac&cheese. Cut it into small pieces. Add too much salt. Chew with mouth open. Don’t give a darn.

Quote of the Day: “Keeping up the appearance of having all your marbles is hard work, but important.”
― Sara Gruen, Water for Elephants
Posted by NatureGirl at 4:00 PM 2 comments:

Sit DOWN: The Early Bird Gets The Worm 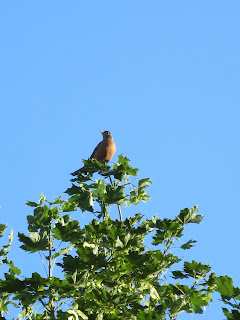 For the past several days, I have been observing the little slice of nature that sits outside my kitchen door. My favorite swinging bench is tucked into a corner near the vegetable garden, and if I sit in just the right spot the sun hits my back as it begins to peek over the trees to my east at sunrise. This week I have been watching an overly attentive Robin dad doing his dad thing. I do not know whether Junior left the nest early and caused the concern, or whether this is just a natural part of the maturation process for the suburban American Robin, but it has been a delight to witness his parenting prowess. 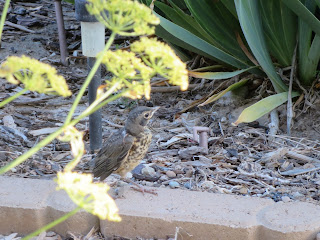 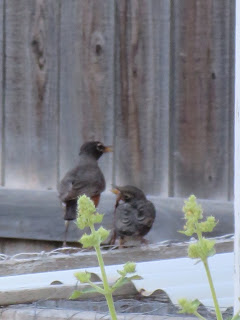 Junior is not all that adept at the whole flying thing just yet. The highest I have seen him go is the top of the chicken coop. The first day I noticed Dad, he sat high in the trees and gave a few tut, tut, tuts until Junior let out a little chirp in response. Dad dutifully dove to the ground on the other side of my fence and came back with a nice worm. By the second day, Junior was less obedient and less prompt with his response. He hopped around on the ground near me for a while (Dad's tuts becoming increasingly loud) until he made his way to the raspberry patch. At this point, I can tell that Dad is still leery of my presence and proximity to Junior, so he stays high in the branches. Like an impish toddler, hiding under the bathroom sink, ignoring his father's entreat, "Come out, come out, wherever you are." Junior kept silent. Dad's incessant tut, tut, tut, became a more shrill and obviously annoyed yeep, yeep, yeep. I believe this translates to the ubiquitous but somewhat ironic paternal admonition, "Get out here now, or I will give you a reason to hide!" 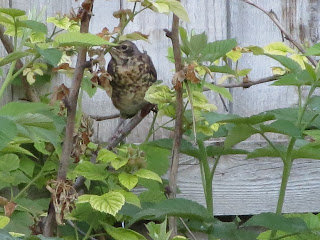 Eventually, Junior conceded and let out one small chirp. Probably more relieved than angry, Dad again, left the safety of the tree, ducked behind the fence and came back with a nice earthworm, tugged from the ground at risk of his own life and limb. 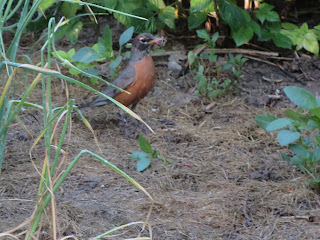 Today, Dad is again in the trees, but obviously more comfortable with my presence as he is now pulling the worms from my garden, nearly at my feet and venturing to the lower branches. He spent most of the morning fending off a giant squirrel. And I do mean giant...that thing is as big as a cat! So far so good. I have held still in my spot every morning for several days. I guess I am blending in now, becoming part of the scene. I like that.

Posted by NatureGirl at 8:15 AM No comments:

GrowingUP: A Rose is a Rose 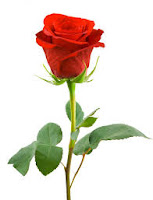 What's in a name?

A question I have often pondered actually. I have a bit of a fascination with names. Where they come from. Why they rise and fall in popularity. How people choose names for their children. Why they choose names for their children when they know full well they will call them something else. I am not talking about nicknames. I mean naming a kid John Jacob knowing full well you will call him Jacob. Stuff like that.

I grew up with a nickname that has stuck with me for 45 years now. I don't mind. I have grown accustomed to it. It is Leli. As in jelly.  My given name is Leslie. I could not pronunce the 'S' when I was little and Leli stuck. Yes, I know it looks like Lee-Lie. I felt like using the spelling Lelly was not true to my name unless it had been spelled Leslly. I also felt like Lelie just looked like I forgot the 'S'. Also, I recently saw a store clerk whose name was Anjelyka. Go ahead, sound it out. I'll wait. Leli is looking pretty good huh?

Leslie was a long time family name, mostly male ancestors of course, but it is also my mother's middle name, so it was carefully chosen for me. My middle name? Not so much. My folks passed a liquor store on the way to the hospital. Cameron Liquor apparently. I am glad they went with just Cameron.

I searched a baby name book once when I was a kid to find the meaning of my given monikers. Leslie means "Dweller of the grey fortress." Adorable, right? Cameron references "a man with a crooked nose." Equally as lovely. I shall not mention Little Sister's given names but they mean "Epitome of femininity" and "Womanly." Have I mentioned I am saving for therapy?

A rose by any other name would smell as sweet.

This implies that the name of something does not really affect who or what they are. I don't know. Can our names affect our personalities? Maybe. What do you think? I really want to know. For real.

Quote of the Day: “I read in a book once that a rose by any other name would smell as sweet, but I've never been able to believe it. I don't believe a rose WOULD be as nice if it was called a thistle or a skunk cabbage.” --Anne Shirley

"I am a mom and a yoga instructor and a writer."

"A writer? Really? What have you written?"

See, now that is the dreaded question. It says to the writer, "Unless I have heard of your writing, you are not a writer." Well screw you. I am a writer if I want to be one. I write stuff, therefore, I am a writer. No one questions your validity as a talker if you say, "I am a talker." Clearly you are made a talker simply by the act of talking. Why do we feel that we have to have validation of our work to be a writer? Because it is a profession. But that is different. "I am a professional writer" implies something different. That feels like, "I am a doctor." or "I am a lawyer." It feels like we have to have training or some sort of proof of our claim. But that is ridiculous. No one will be hurt by the amateur practice of authoring. It differs from medicine in that respect.

So,  make the declaration. I am a writer. Just BE one and then go on being one even if you have not put pen to paper in days or weeks. Have the mind and heart of a writer. Have the senses of a writer. Observe, daydream, live, try new things, eat new foods, go new places. These are writer things. Read. Read. Read. This is a writer thing. When a doctor is out of the operating room or a minister away from the pulpit he does not cease to be what he is. You are a writer without pen in hand. Writing is sometimes something you do, but it is always something you are. Be it. Be it unashamedly. Declare it today. I am a writer, and let yourself totally be a writer from now on.

NatureGirl
SE Idaho
The SIMPLE MINDED girl who blogs here is very happily married to the man of her dreams, hoping someday to become the woman of HIS dreams! They have four great kids whom they adore but take pleasure in sometimes embarrassing in front of their friends. She is a snob (with no right to be) about books, movies and music and intends to post quite a few suggestions (i.e. ego-driven overtly opinionated rants) on what you should read, watch and listen to. She feels passionately about religion, simplicity, nature, yoga, food, politics, learning and (most of the time) life! This blog is an experiment in reaching out to long lost friends, and perhaps making a few new ones.